Rapunzel, Rapunzel, let down your hair

the story of Rapunzel 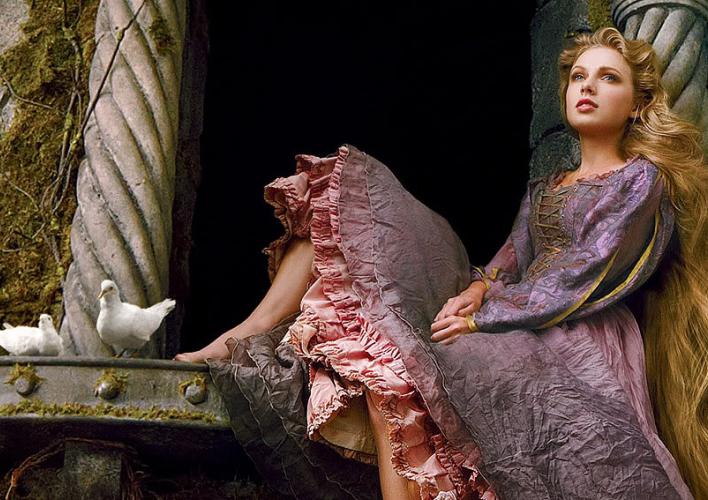 Long, long ago in a house that overlooked a beautiful garden lived a childless couple. They prayed to God every day to bless them with a child. One day they found that God had answered their prayer. They were at long last going to have a baby!Their days passed in happiness but alas! the wife fell ill. She would eat nothing and the husband was worried that she would waste away. He tried to tempt her with many good things but she refused everything. “But you must eat something, my dear,” he begged her. “There is a herb called Rapunzel in the garden next door. I will feel better if I can eat that,” she said. The husband’s heart sank when he heard her.

This garden was owned by a wicked witch who would let no one enter. But he loved his wife very much and so with a pounding heart, he decided to go into the garden at a time when the witch was away. One day, finding an appropriate time he went into the garden. He had managed to pluck the herb but as he was about to leave, the wicked witch came back. “You thief! How dare you enter my garden?” she screamed. She threatened to put a curse on him. He fell at her feet and begged, “Please don’t curse me. If my wife doesn’t eat this herb, she will die. She is going to have a baby and is very ill.” The witch stopped to think awhile. “I will let you go on one condition. You will give me the baby after it’s born.”

The poor man had no other way out but to agree.He took the herb to his wife and miraculously she soon recovered and gave birth to a beautiful girl. But as per the agreement the witch came to take the baby away. She took Rapunzel—for that’s what she named her—far away and locked her in a high tower. The tower had no doors or stairs. There was only a window on top.The only person whom Rapunzel ever saw was the wicked witch. Rapunzel grew up to become beautiful with pretty eyes, a beautiful voice, and her golden hair grew very, very long. All day long, when Rapunzel was alone, she would sing and weep.Every day, the wicked witch came to the tower with food. She stood at the bottom of the tower and shouted. “Rapunzel! Rapunzel! Let your hair down!” Rapunzel would drop her long, braided hair through the window. The witch used the hair as a rope to climb into the tower.

One day, a handsome prince was passing by and heard her sing. He fell in love with her voice and unknown to all came to the tower every day to hear her sing. One day, the prince saw the witch climbing up the tower using Rapunzel’s hair.The next day, the prince too called out to Rapunzel. “Let down your hair,” he said. The prince climbed to the top of the tower. After that, the prince came to meet Rapunzel every night.Alas! the witch soon discovered the prince with Rapunzel. She pushed him from the tower onto a thorny bush, making him blind. She banished Rapunzel into the desert far away.Many years passed. The blind prince wandered alone and finally reached the same desert. One day, he heard familiar voice singing. Following the sound he found her. They hugged each other in joy. Tears of happiness rolled down Rapuzel’s cheek. As the tears fell on the prince’s eyes, he regained his vision.The prince took Rapunzel to his kingdom and they lived happily ever after.